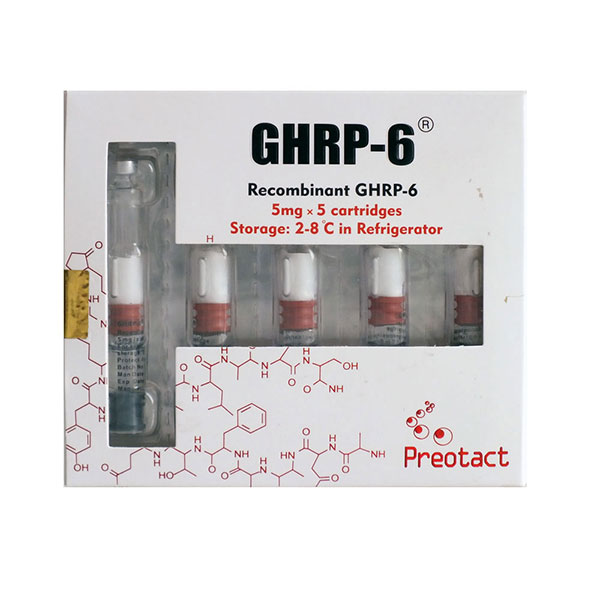 The Development of GHRP-6

In 1982, the natural hormone “Growth Hormone Releasing Hormone” (GHRH) was identified after a prolonged search. Soon, researchers discovered that those GH-Releasing Peptides (specifically GHRP-6 & GHRP-2) followed a mode of action which bound them to and was mediated through receptors different from those for GHRH. Furthermore, researches discovered that these GH-Releasing Peptides acted synergistically with the natural hormone Growth Hormone Releasing Hormone (GHRH), which is related to Sermorelin, in both laboratory animals and humans to produce large releases of Growth Hormone. In the 1980s, the first highly potent GH-Releasing peptide, GHRP-6, was developed. Due to a strong GH release response from the the peptide, it became the first member of a class called Growth Hormone secretagogues. GHRP-6 is a hexapeptide composed of 6 amino acids: L-Histidine, D-Tryptophan, L-Alanine, L-Tryptophan, D-Phenylalanine and L-Lysine. The “L” form of an amino acid is the naturally occurring form and often in the nomenclature the “L” is dropped. The “D” form does not occur in nature and is the isomeric form (i.e. mirror image) of the naturally occurring “L” form. GHRP-6 (His-D-Trp-Ala-Trp-D-Phe-Lys-NH2) is composed of both natural and isomeric forms of those 6 amino acids.This sequence provides a signal to the body to begin secreting Growth Hormone release while also blocking Somatostatin, a hormone that inhibits the release of Growth Hormone.

Studies Related to the GHRP-6 Peptide

Investigations reported that GHRP-6 is more efficient than GHRH itself in monkeys and performs synergistically when combined or applied together. An example of this combination would be GHRP-2 and CJC-1295. GHRP-6 is believed to be acting naturally on both pituitary and hypothalamic sites (Fairhall et al. 1995). In a time-dependent and dose-dependent manner, the primary pituitary cells of rats were demonstrated on. From the studies, the concentrations of the GHRP-6 needed for the half-maximal and maximal stimulation were 7 x 10(-9) and 10(-7) M, respectively.

In another study, it was concluded that the major target of the GHRP-6 in vivo (both laboratory animals and humans) is the hypothalamus. From the observation, it was concluded that the GH release induced by the central GHRP-6 injections in guinea pigs was inhibited by the central action of somatostatin. Furthermore, an inhibition by somatostatin with the activated GRF neurons, induced by GHRP-6, was observed via receptors known to be located on or near the GRF themselves. This particular experiment further indicated that GHRP-6 is effectively stimulating GH release from somatotrophs through different receptors, the mechanisms of which are not yet known (Chan et al. 1989).

Determining how efficient and the actions of the growth hormone is dependent on the physical condition of the experimental unit. For example, in humans, GH secretion decreases with obesity. On the other hand, GHRP-6, similar to Hexarelin, showed in one case increased (almost twice that of GHRP) GH responses when administered in obese patients (Cordido et al. 1993). Though obesity has shown affecting the efficiency of the hormone, it was also suggested that GHRP-6’s effects were found to be sex- and age-independent without being affected by the noadregenic pathways using the a2 adrenergic receptors (Penalva et al. 2008).

GHRPs are not simply surrogates of GHRH, instead GHRP-6 is an artificial activator of a separate newly discovered receptor called Growth Hormone Secretagogue Receptor (GHS-R). Soon Ghrelin was discovered, the endogenous ligand that binds to the GHS-R. Both Ghrelin and all the synthetic compounds such as GHRP-6 were termed “Growth Hormone Secretagogues” (GHSs). One side effect of GHRP-6 is a significant increase in appetite due to stimulating the release of Ghrelin, a peptide that is released naturally in the lining of the stomach that increases hunger and gastric emptying. Also, GHRP-6 causes stimulation of the anterior pituitary gland which causes an increase in Growth Hormone release. The increased amounts of Growth Hormone can cause the liver to secrete the hormone IGF-1, which improves the animal body’s ability to burn fat and build muscle. Since GHRP-6 acts directly on the feedback loop which signals the inhibition of Growth Hormone release, GHRP-6 can re-stimulate the production of Growth Hormone.