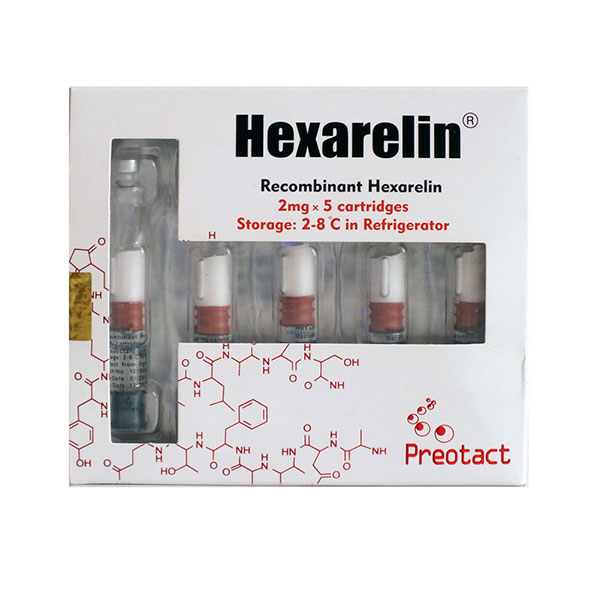 Hexarelin is a synthetic hexaptide which has GH-releasing properties. Hexarelin, administered subcutaneously produces a dose-dependent GH response from the Pituitary.

The advantages of having HGH secreted in larger amounts in the body would be similar to what happens when injectable growth hormone is administered. Effects from GH include increased bone mineral density, increased mitosis and meiosis which leads to more muscle mass, triglyceride hydrolysis which causes prominent fat loss, connective tissue strengthening, and improved skin elasticity.

GH secretion also leads to the liver secreting more IGF-1 (Insulin-Like Growth Factor One), which by itself has a host of effects similar to GH. Users of IGF-1typically experience increased strength and muscle mass, as well as a very pronounced fat loss.

Therefore, by injecting Hexarelin, the user will experience all of the effects of both Growth Hormone as well as IGF-1. However, since Hexarelin actually stimulates the body to produce more GH, it may be likely that the eventual shutdown of the body’s natural GH production may be avoided, as is seen with injectable GH. For this reason, many athletes use Hexarelin alone, but others have used it after a Growth Hormone or Insulin-Like Growth Factor one cycle, to “jumpstart” their own natural GH and IGF-1 production.

Hexarelin stimulates GH secretion. Hexarelin is more resistant to proteolytic degradation than GHRP-6. Hexarelin has 7 amino acids H-His-D-2-Methyl-Trp-Ala-Trp-D-Phe-Lys-NH2 and having a molecular weight of 887 Dalton. The Molecular Formula is C47H58N12O6.

Growth Hormone Releasing Peptides (GHRP-2, GHRP-6 and Hexarelin) are a small family of peptides acting at the pituitary and the hypothalamus to release Growth hormone (GH). These peptides were discovered 20 years ago and in clinical researches proved to be able to stimulate pituitary to produce endogenous Growth hormone.

GHRP-2, GHRP-6 and Hexarelin are replaceable drugs and have similar mechanism of action.

Cycle: 16 months. The dosage is prescribed individually and injected 1-6 times a day starting with 25-50mcg and gradually increasing it with the step of 25-50mcg to achieve minimal side effects. Then, there should be return to the starting dose. The injections are usually made subcutaneously in an abdominal area 30 minutes before or in 1-1.5 after meal. The time between injections should be 3-4 hours (in order the body has the time to produce GH for further release).

Hexarelin is a peptide structurally similar to GHRP-6, which stimulates secretion of endogenous GH. Hexarelin has the majority of synthetic GH effects, but these effects are less evident with Hexarelin than with GH. The main effects of Hexarelin include increase of strength, growth of new muscle fibers, improving of vessels state, reduction of fat mass. The main difference of Hexarelin from GHRP-6 is that Hexarelin does not promote appetite, because it does not increase the level of ghrelin in the body.

This drug proved to be a great healer of wounds and can be administered as a multipurpose anabolic and with the purpose to stimulate endogenous GH secretion inhibited with the use of synthetic GH.

Ghrelin mimetics have been demonstrated in clinical environments to release more growth hormone than GHRHs in comparison studies. [2] Ghrelin mimetics are less susceptible to environmental, hormonal, and physiological factors that inhibit GHRH-induced GH release, such as somatostatin, fatty acids circulating in plasma, and timing of the natural rhythmic growth hormone pulse in the human body. [1]

Each of the Ghrelin mimetics has unique properties largely unrelated, in most cases, to effecting the release of growth hormone from the pituitary. Hexarelin “reduces injury of cerebral cortex and hippocampus after brain hypoxia-ischemia in neonatal rats” according to one study; this effect may possibly be achieved with ghrelin, as well. [4] The ghrelin mimetics (GHRPs) are believed, as a whole, to potentially exert an antioxidant benefit on the testis by action involving the GHS-R type 1a present in Sertoli and Leydig cells; it may have antioxidant and anti-inflammatory effect through reduction of lipid peroxidation as well as increasing the activity of the body’s three main antioxidant systems (superoxidate dismutase, glutathione peroxidase, and catalase), and may additionally protect spermatozoa from free radicals. [5]

GHS-R mRNA was abundantly expressed in cardiomyocytes and was unregulated after administration of hexarelin. These results suggest that hexarelin abates cardiomyocytes from ANG II-induced apoptosis possibly via inhibiting the increased caspase-3 activity and Bax expression induced by ANG II and by increasing the expression of Bcl-2, which is depressed by ANG II. [6]

In a separate study, Pang et al found data leading them to believe that hexarelin may have potential benefits in humans for treating atherosclerosis:

Hexarelin suppressed the formation of atherosclerotic plaques and neointima, partially reversed serum HDL-c/LDL-c ratio and increased the levels of serum NO and aortic mRNAs of eNOS, GHSR and CD36 in As rats. Hexarelin also decreased [(3)H]-TdR incorporation in cultured vascular smooth muscle cell (VSMC) and calcium sedimentation in aortic wall.