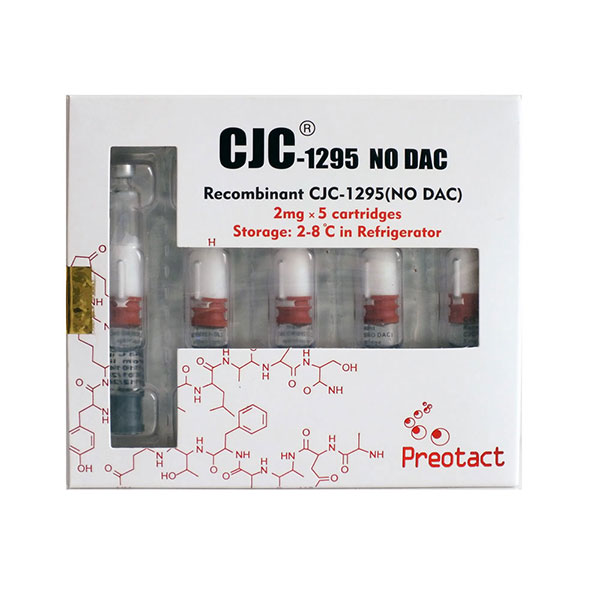 CJC-1295 is a Long acting GHRH analog. Growth-hormone-releasing hormone (GHRH), also known as growth-hormone-releasing factor (GRF or GHRF) or somatocrinin, is a 44-amino acid peptide hormone produced in the hypothalamus by the arcuate nucleus. GHRH stimulates growth hormone (GH) secretion from the pituitary. GHRH is released in a pulsatile manner, stimulating pulsatile release of GH respectively.

The active portion of this GRF or GHRH peptide can be found as a 29 amino acid long peptide and is appropriately named GHRH1-29. This pulsatile release of various peptides is due to the negative feedback loop that is part of the hGH axis and controls the amount of hGH that your body produces to keep it in a homeostatic environment. Despite the effectiveness of GHRH to stimulate growth hormone release there are a number of problems associated with using it in vivo. The most noteworthy problem is the half life of the peptide, which has been shown to be ~7 minutes using advanced HPLC technologies that have proven to be very accurate. The reason for this relatively short half life is due to an enzyme called dipeptidylaminopeptidase IV (DPP-IV), which has a high affinity for the amino acids Ala and Pro and in the case of GHRH it cleaves the 1 and 2 positions that consist of Tyr-Ala, creating GHRH3-29, an inactive form of the peptide. To prevent the problems associated with natural GHRH, pharmaceutical companies looked at new ways to increase the half life and bioavailability of these smaller peptides with technologies that work far different than other technologies, such as PEGylation.

CJC-1295 is a synthetic modification of growth hormone releasing factor (GRF) with D-Ala, Gln, Ala, and Leu substitutions at positions 2, 8, 15, and 27 respectively. These substitutions create a much more stable peptide with the substitution at position 2 to prevent DPP-IV cleavage, position 8 to reduce asparagine rearrangement or amide hydrolysis to aspartic acid, position 15 to enhance bioactivity, and position 27 to prevent methionine oxidation. By applying the Drug Affinity Complex (DAC) technology to GRF, the peptide selectively and covalently binds to circulating albumin after subcutaneous (SC) administration, thus prolonging its half-life. These substitutions are key in increasing the overall half life of CJC-1295 but there lies an even greater reason as to why the half life has been extended from ~7 minutes to greater than 7 days! Bioconjugation is a relatively newer technology that takes a reactive group and attaches it to a peptide, which in turn reacts with a nucleophilic (usually a partially negative molecule) entity found in the blood to form a more stable bond. Albumin, one of the most abundant substances in the human body is chosen as the nucelophile by this particular peptide thanks to a Cys34 thiol group that attracts it. By combining the tetrasubstituted GHRH analogue with maleimodoproprionic acid using a Lys linker, you create a GHRH peptide with a high binding affinity for albumin. Once the CJC-1295 molecule has attached itself to albumin, it is given an extended half life and bioavailability thanks to the albumin preventing enzymatic degredation and kidney excretion. In fact, bioconjugation is so effective that there was less than 1% of CJC-1295 left unreacted in vivo and over 90% was stabilized after subcutaneous injection. This means that you get more of what you paid for working for you. There was no DPP-IV degredation observed on CJC-1295 in any of the various experiments conducted.

Various experiments have been conducted to test the effectiveness of CJC-1295 in vivo and the Journal of Clinical Endocrinology & Metabolism has reported dose-dependent increases in mean plasma GH concentrations by 2-10 fold for more than 6 days and increased IGF-1 concentrations 1.5-3 fold for 9-11 days after a single injection!

(from the same study) Subcutaneous administration of CJC-1295 resulted in sustained, dose-dependent increases in GH and IGF-I levels in healthy adults and was safe and relatively well tolerated, particularly at doses of 30 or 60 µg/kg. There was evidence of a cumulative effect after multiple doses

Not only that but they proved the mean half life to be 5.8-8.1 days and after multiple doses showed mean IGF-1 levels remained above baseline for up to 28 days following! No serious adverse reactions were reported in any group.

Because of the long half-life and stability of the CJC-1295 analog it may only need to be taken 1-2 times per week. However research on GHRH knockout mice showed that e/d injections where superior in increasing GH vs every 48 or 72 hours. “GHRHKO animals receiving daily doses of CJC-1295 exhibited normal body weight and length. Mice treated every 48h and 72h reached higher body weight and length than placebo-treated animals, without full growth normalization.” These mice were treated for 5 weeks.
However the flaw in this study appears to be that the mice treated e/d were receiving a larger dose, so at minimum cjc-1295 is dose dependent. Whether or not a more frequent injection would prove to be beneficial is yet to be determined.

Growth Hormone Releasing Hormone (GHRH) CJC-1295 is a synthetic secretalogue which stimulates HGH release. In the human body, large amounts of growth hormone are stored in the pituitary. GHRH affects the number of secreting cells and the amount they are able to secrete.

Dosing GHRH once at night for anti-aging purposes and multiple injections (1-3x) for anabolism. CJC-1295 has the ability to make the body produce its own GH as compared to using synthetic HGH. GHRP-6 use in conjunction with CJC-1295 is synergistic, amplifying the GH pulse considerably.

Most common desirable form to find and research with CJC-1295 (Growth Hormone Releasing Factor) is a modified GRF (1-29), lacking the DAC (drug affinity complex). This GHRH (mod GRF 1-29) has 30 minute half life, superior to that of Sermorelin. Post injection flush is common.

CJC-1295 is a Long acting GHRH analog. Growth-hormone-releasing hormone (GHRH), also known as growth-hormone-releasing factor (GRF or GHRF) or somatocrinin, is a 44-amino acid peptide hormone produced in the hypothalamus by the arcuate nucleus. GHRH stimulates growth hormone (GH) secretion from the pituitary. GHRH is released in a pulsatile manner, stimulating pulsatile release of GH respectively.